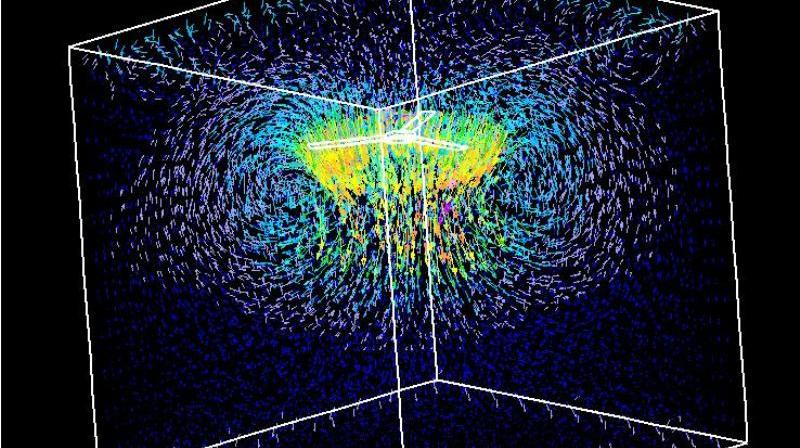 The power output of solar panels shows an inverse relation with its operating temperature and that affects largely for countries like Sri Lanka, which are situated near the equator. The aim of this study is to increase the solar cell energy generation efficiency up to its design efficiency by using an integrated cooling system. Possible cooling techniques which are aligned with Sri Lankan context were studied by referring past research and available systems. Rear side forced water cooling with thermal collector was identified as the most feasible technique by considering economic and environmental factors. Theoretical model was developed to estimate the design parameters of the experimental setup and predict the cooling performance. Number of ten cooling channel design configurations were modelled and analysed the cooling performance using ANSYS fluent simulations. The best design configuration was identified based on heat transfer and manufacturing capability. A prototype was manufactured to investigate the cooling performance experimentally. The experimental setup was developed using two 100-Watts solar panels with the capability of solar tracking. A cooling tower was developed to remove the extracted heat. Both power and panel temperature variation were observed and efficiency improvement was estimated. Experimental results were analysed to validate the numerical analysis performed using ANSYS fluent.  The research work will be further extended to identify the optimum cooling liquid flow rate. Although, the designed efficiency was not achieved, the results of the both theoretical and experimental analysis show that integrating a rear side cooling system would increase both electrical and thermal efficiency by 63%. Considering the cost benefits and the environmental conditions of the Sri Lanka, using a heat removal system for solar modules is a feasible option. Read more...

2. Study on viscous and thermal properties of nanofluids through classical molecular dynamic simulations

To increase the efficiency of many modern-day heat transfer processes, the ability to transfer heat to or away from the working fluid is a critical requirement. Additionally, improved heat transfer techniques reduce the exergy generation during the heat transfer process and increase the second law efficiency. Low thermal conductivity (λ) of traditional heat transfer fluids such as water have constrained their applicability in such improvements and transpires the requirement of a new class of fluid. Nanofluids offer enhanced λ compared to their counterpart traditional heat transfer fluids and thereby show promising applicability for improving heat transfer processes. However, nanofluids come with drawback of increased viscosity (μ) as well. This increased μ can negatively impact on the performance gain achieved through enhancing λ due to the increased requirement of pumping power while decreasing the overall heat transfer coefficient. Therefore, identifying microscopic mechanisms responsible for λ and μ enhancements in nanofluids is essential to draw out the maximum potential of nanofluids in heat transfer applications. With the power of classical molecular dynamics to have an atomic level insight, this research is focused to investigate the dominant microscopic mechanisms such as clustering of nanoparticles on λ and μ enhancements. Read more...

Determination of the design conditions for ORC is exceedingly difficult to optimize. The conditions must be identified the design parameters for an ORC system especially with selection of the working fluid and operating parameters of the components for better performance. This research is designed to address the design parameters variation for the better efficiency of the system and how the thermal energy available from the sources would be used to deliver for ORC system. And the potential economic concerns of such system in terms of practical application. The project deals in selection of working fluid, the efficiency variation of the system with respect to hot side temperature, cold side temperature, flow rate of the fluid, variation of heat supply etc. Simulation is carried out to model the above parameters in a software platform to construct the model to evaluate the work output, efficiency variation and exergy destruction. Thermo-economic analysis is carried out to optimize the economic and thermal output from ORC systems. Read more...

Ceiling fans are widely used as a means of providing thermal comfort to occupants in an indoor environment all around the world and it contributes to a significant portion of annual energy consumption throughout the world. A number of standards for efficiency analysis of ceiling fans are employed by many countries, with the intention of making ceiling fans more efficient. In these test standards, different test setups have been utilised. Work performed on analysis of the effect of these setups on performance evaluation of ceiling fans is currently unavailable. Further, there is a scarcity of research work performed on analysis of flow characteristics around a rotating ceiling fan. Understanding the proper flow around a rotating ceiling fan can lead to designing more efficient fan blades, which can lead to significant energy savings. Therefore, this study is split into two sections. In section one, a systematic investigation of the different test standards available for performance analysis of ceiling fans is performed, namely standards considered are ANSI/AMCA 230 standard, IEC 60879: 1986 standard, SLS 1600:2011 standard and Energy Star v1.2 standard for performance testing of ceiling fans. In section two, a flow physics analysis around a ceiling fan is carried out. For these, a CFD model was developed and it was validated using experimental results. The analysis of test standards was carried out by using a RANS method whereas the analysis of flow physics was carried out by using LES method. The numerical results obtained shows that the test cylinder present in some of the standards mentioned above, does not have a significant impact on the measured performance of the tested ceiling fan (variation is less than 2%), therefore having a test cylinder at an extra cost have no benefit on the measured results of ceiling fan testing. On the other hand, maintaining test cylinders for every fan size would impart a significant cost on the testing process and having a cylinder which is not correctly aligned can lead to inaccurate readings. From the flow results of the LES simulations, creation of two major vorticial structures is seen arising from the tip and the root of the blade. As these vorticial structures move further downward, more vortices were formed due to the action of these and the number of vortices keep growing with flow time, resulting the flow to become turbulent with the flow time. Furthermore, it was seen that the flow transition from laminar to turbulent occurred at the mid chord section, starting from the deflected section of the blade. Read more...

Thermoelectric (TE) technology allows the conversion of energy between thermal and electrical forms using noise and maintenance free solid-state devices. Nevertheless, the low efficiency of TE materials has hindered their use in commercial applications. For decades, the global research community has studied bulk materials to obtain minute improvements in efficiency. However, with the advent of nanotechnology, the ability to engineer the structure of materials began to show a significant enhancement of TE efficiency in low dimensional nanomaterials. Even so, the possibility of designing a plethora of nanostructures where many quantum effects control the overall efficiency of the material, has managed to bewilder the scientific community thus far. This research focuses on the development of a nanostructured semiconductor material to be used for automobile applications where most of the energy is lost in the form of waste heat. The use of classical Molecular-Dynamics based research tools have provided the ability to investigate atomic scale properties of materials. Preliminary investigations into thermal properties of nanostructured silicon have provided a 99.6% reduction in thermal conductivity which is a key factor in improving the TE efficiency. Further investigations are being conducted to develop a TE material optimized to be used in various sections of automobiles. Read more...

An article on "Sri Lankan graphite: To store energy and fix economy" by Ms. Dasuni Hewawasam, Dr. Lihil Subasinghe, and Dr. Sanjeeva Witharana is published in The Sunday Times

The Department of Mechanical Engineering of the University of Moratuwa is pleased to announce the commencement of the Postgraduate programme in “Energy Technology” for the academic year 2022/2023 and invites applications for admission from suitably qualified candidates. The courses are offered Read more
Call for Applications - M.Sc. / PG Diploma in Building Services Engineering (BSE) 2023/2024 – Intake 08

The Departments of Mechanical Engineering, Civil Engineering and Electrical Engineering of the University of Moratuwa are pleased to announce the commencement of the Postgraduate Programme in “Building Services Engineering” for the academic year 2023/2024 and invite applications for admission from Read more
Annual General Meeting of IMechE Student Chapter 2022

The Annual General Meeting of IMechE Student Chapter of University of Moratuwa was successfully held on 20th October 2022 in the University premises. The event was honoured with the participation of Mr. Lal Weerasinghe; Chairman of IMechE Sri Lanka Group as the guest of honour, Dr. Himan Punchihewa Read more
END_OF_DOCUMENT_TOKEN_TO_BE_REPLACED