In return, under the coordination and guidance of Dr. Y.W.R. Amarasinghe, a team of ten people from Department of Mechanical Engineering visited Japan for the program. The team was hosted by the University of Miyazaki, Japan. The team composed of four undergraduate students representing Mechatronics stream, four graduate research assistants where two were from mechatronics and other two from bio robotics and Energy streams. Two researchers from department of mechanical engineering academic staff was also participated.
During the science exchange program, they had the exposure to observe the research projects of the SANWA Company LDT, do laboratory visits in the University of Miyazaki, Faculty of Engineering, take part to a workshop in mobile robotics and most importantly the cultural visits. Additionally, two graduate students presented their research outcomes in an organized session named Advanced Technology on Sensing Technology, Devices, Application in the International Conference on Artificial Life and Robotics 2018, which was held on Beppu, Oita, Japan from February 1-4. During the conference, four previously accepted research work was presented by the research students. Additionally, the team visited the University of Miyazaki for presenting their research work in the respective research areas and to experience the University environment. Dr. R.A.M.P. Ranaweera and Mr. W.P.D. Welgama was participated as senior researchers from Department of Mechanical Engineering. The team was returned on 5th February 2018 by successfully completing the tour. The team members were given a special certification on behalf of participating for the program by Prof. Hiroki Tamura in an awarding ceremony. 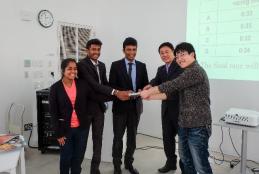 The Departments of Mechanical Engineering of the University of Moratuwa are pleased to announce the commencement of the Postgraduate programme in “Manufacturing Systems Engineering” for the academic year 2021/2022 and invite applications for admission from suitably qualified candidates. The course Read more
Donation of a DAEWOO cutaway automobile Petrol IC engine and powertrain demonstration kit

The Department Official Welcome for the intake 2019 was held on 8th December 2020 as a virtual event. The event was graced with the presence of Eng. Gratian Peiris, as the chief guest, Dr. Himan Punchihewa; Head-Department of Mechanical Engineering, academic staff members of the Department and the Read more
M.Sc. / PG Diploma in Building Services Engineering (BSE) 2020/2021