The Emblem of University 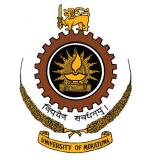 The emblem of the University is an artistic composition of five parts. The bottom band gives the name of the University, the "University of Moratuwa", above which are two sheaves of paddy spreading upwards onto two sides embracing the free floating University Motto, written in Devanagiri Script, and above that is a Wheel symbol, enclosing a traditional oil lamp resting on a book, crowned with the National Lion carrying the sword in its dexter paw. The lion depicted in the emblem is the same as that found in the National Flag, indicating the National Status of the University. The toothed wheel has two meanings. It represents the Wheel of Truth, the Dhammachakka and also indicates the continuing advancement of Technology. The simple single flame, traditional oil lamp inside the wheel, emitting the light of wisdom is resting on a traditional ola leaf book that symbolizes the accumulated wisdom and knowledge. The sheaves of paddy indicate prosperity and abundance.