Ms. Harshini Mallawaarachchi from the Department of Building Economics, University of Moratuwa, has received the prestigious CVCD Excellence Award for the "Most Outstanding Young Researcher in the field of Technology, Engineering, Architecture, Quantity Surveying and Information Technology".

The award was conferred by the Committee of Vice-Chancellors and Directors Sri Lanka (CVCD). CVCD awards are one of the most prestigious awards presented to prolific academic staff members in the state universities of Sri Lanka in honour of their outstanding contributions to the field of research. It is a once-in-a-lifetime achievement which is awarded every two years since 2006. The CVCD was established in 1979 under the Universities Act as an advisory body to the University Grants Commission and comprises the Vice-Chancellors of the state universities and the Rectors of university campuses.

Ms. Mallawaarachchi joined the Department of Building Economics, University of Moratuwa as a Lecturer in 2011, was promoted to Senior Lecturer in 2018.

She obtained her primary education at Sri Chandrarathne Manavasinghe Vidyalaya, Maharagama and her secondary education at St’ Josephs Girls School, Nugegoda. She graduated with a B.Sc. (Hons) degree in Facilities Management in 2011 and a Master of Philosophy in Sustainable Built Environment in 2016 from the University of Moratuwa. Currently, Ms. Mallawaarachchi is reading for her Doctor of Philosophy under University of Moratuwa and Deakin University Joint PhD program. The focus area of her doctorate is on the water flow optimisation of industrial symbiosis through wastewater recovery. She is a member of the Institute of Facilities Management Sri Lanka and an associate member of Green Building Council of Sri Lanka. She has published in many indexed journals and made numerous presentations at national and international conferences. Her research interests include Sustainable Development, Green Buildings, Carbon Footprint, Waste Management, Circular Economy and Industrial Symbiosis.

In addition to her recent achievement, Ms. Mallawaarachchi has received several accolades for her contributions to academic research. In 2017 she was a gold medalist and finalist at the 3MT Thesis Presentation Competition organised by Sri Lanka Academy of Young Scientists (SLAYS) and National Science Foundation (NSF), Sri Lanka. With that she was able to participate for the Certificate Course of Japan-Asia Youth Exchange Program in Science (Sakura Exchange Program in Science) under the Technology Exposure Visit which was administrated by Japan Science and Technology Agency, and Japan International Science and Technology Exchange. Her research paper on Indoor Environment Quality and occupants’ productivity presented at 4 th World Construction Symposium won the Emerald BEPAM Highly Commended Paper Award in 2015. In 2013, she was presented with the NRC Merit Award for Scientific Research Publications. She has obtained Outstanding Research Performance Award with Distinction, awarded by University of Moratuwa continuously during 2016-2019.

The University of Moratuwa conveys its congratulations and wishes all the best for her future endeavours. 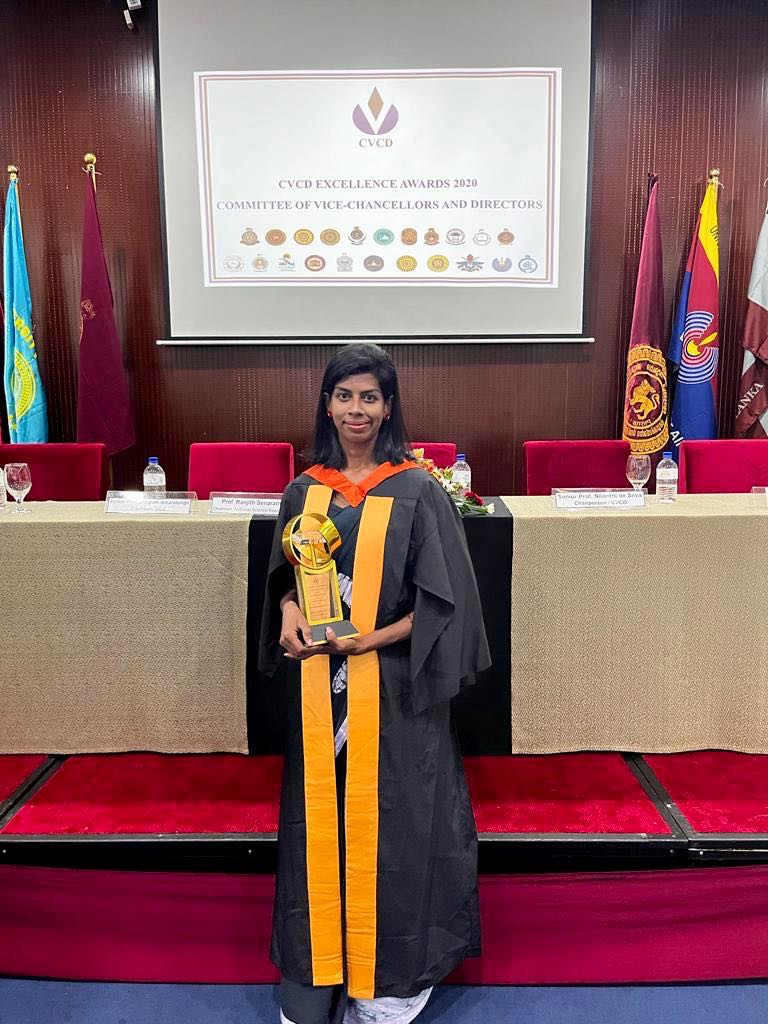